HOW TO TRAVEL ON A PLANE WITH A TODDLER

Though this post is titled "How to Travel on a Plane with a Toddler", it could be titled "The Importance of a Great Travel Bag for a Toddler". 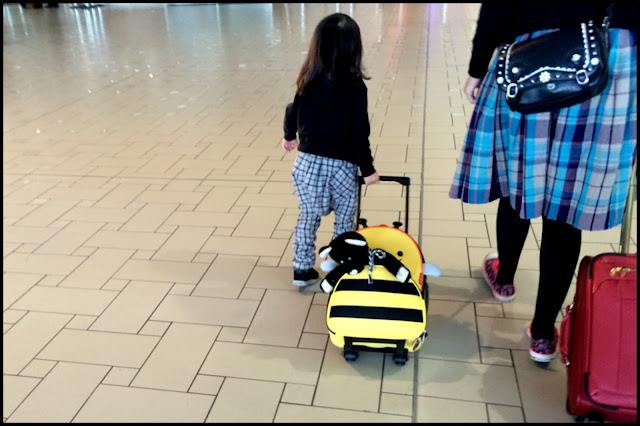 In the weeks leading up to going to Bali, I kept explaining that we were going on a holiday, and that it would take a long time at the airport and on the plane. I told him it would be like a long long long car ride, except we would be in a plane in the clouds.

Step 1: Get your child ready mentally for the trip, and what going on a plane entitles.

The next thing I did was to get Jarvis involved, I allowed him to pick and buy his own carry on luggage. At first he wanted a "Rainbow" suitcase, but as soon as he saw the Bumble Bee, it was love at first sight for him. We made a big deal about this explaining all of his 'special things' would go in to this for the plane, and for the holiday. I also allowed him to pick my new carry on bag.

Filling the bag, was as much fun as buying the bag. Together we wrote a list of things he wanted in his bag. He said, food, lollipops, books, cars and his ABC learning cards. I thought his list was pretty good so I stuck closely to that. The hardest thing was editing down what books to take. I bought him three new Matchbox cars, so he would have something new to open in cases of emergencies. In the end, he also wanted to take his hand knitted Bear on holiday, so Bear came along as well.
There are heaps of other posts online giving hints on what to pack.  A couple of new things to open and amuse them, also make sure there are familiar things to give them comfort.

Step 3: Make sure they pick things to fill the bag that are important to them, not to you as a parent. What you think is important can go in your own carry on bag.

Jarvis practiced wheeling his bag for days before we left. So he was thrilled to wheel it when we got to the airport. But I also made sure it fitted, and was easy to carry, on top of my carry on luggage.

Step 4: Think through the process of two carry ons and a toddler. In case you have to carry all three items.

Once at the airport, Jarvis was happy, and could not wait to get on the plane. On the plane, we made sure everything was easy for Jarvis to reach. I sat him in between Justin and myself so he would not annoy anyone with his getting on and off the seat to reach into his bag. Some 'quiet time' was had, with me bringing along my notebook so he could watch a movie.
I also involved and allowed him to make lots of choices. Giving him freedom to be a toddler. That way the big things, such as staying in your seat, being quiet, then dealing with the huge line ups at customs he allowed us to make the choices.

Step 5: Allow them lots of little freedom. So they follow the rules when needed.

I think Step 1 and Step 5 are the most important. Get your child ready mentally for the trip, plus allowing them to be a toddler when ever possible. Jarvis friended another child in the lead up to getting on the plane. So when the plane was delayed, and all of the adults were getting annoyed, I encouraged Jarvis and this other boy to play. I said to Jarvis as long as he stayed in a two meter radius of me and did not bump other passengers or make to much noise her could run and play with the boy. So when we boarded, he had burnt off a fair bit of energy. The hostess remarked on how extremely well behaved he was for the entire flight.

I think the biggest hint I can give is talk to your child, before, during and after the plane ride. Ask them how they are feeling, what they are thinking. Kids are such intelligent beings they will allow you to help them, and guide them into being amazing travellers.
Posted by Iliska Dreams at 00:40