DON'T JUDGE A BOOK BY IT'S COVER.

The English idiom "don't judge a book by its cover" is a metaphorical phrase which means "you shouldn't prejudge the worth or value of something by its outward appearance alone". I think we have all been guilty of this at one point or more in our lives, and I know people have judged me on my outward appearance.

But what would happen if you were not only judged on your appearance and your occupation, but so was your ten year old son? 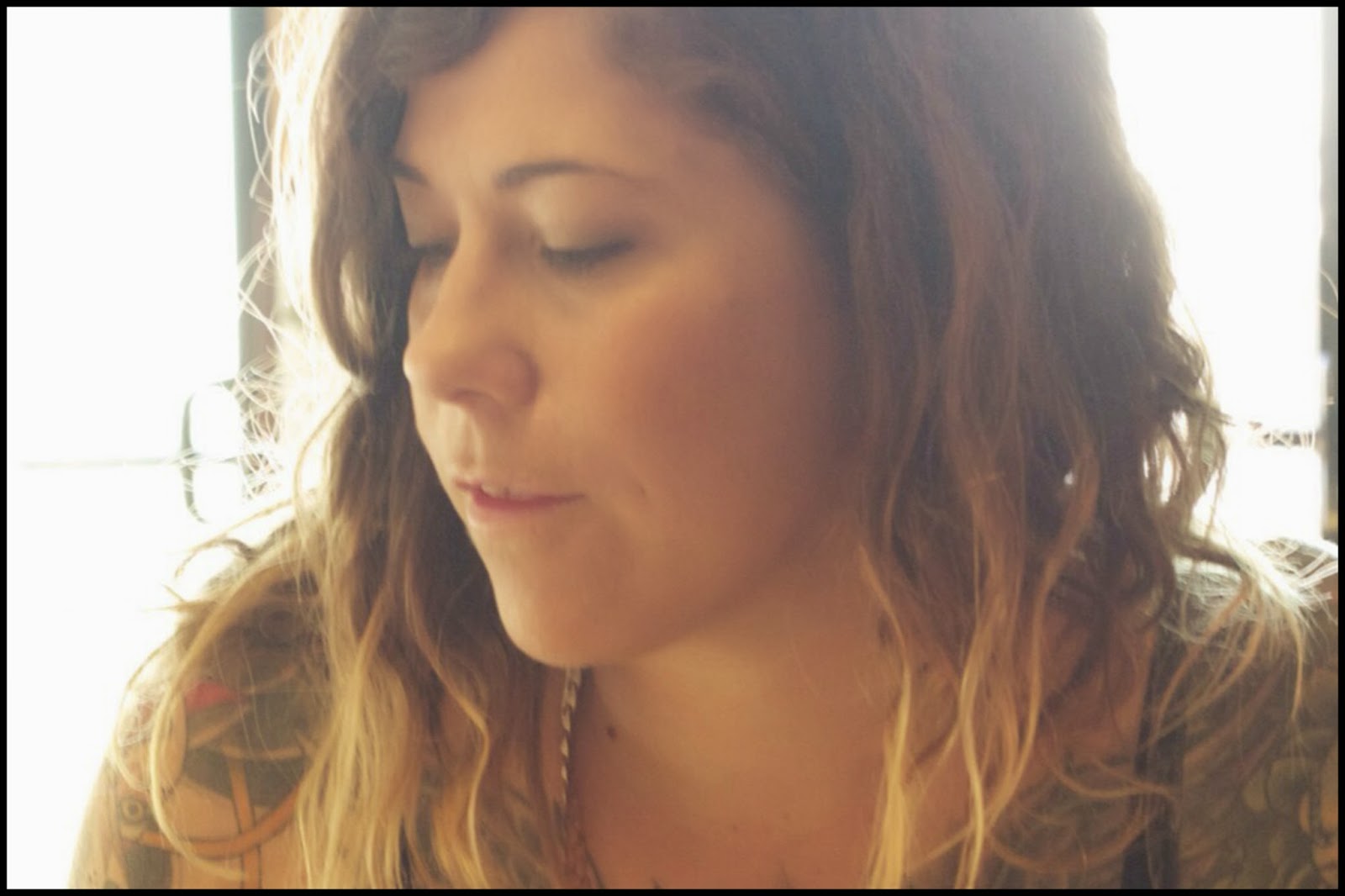 Below is an article, copied in it's entirety from the Common Ground webpage. Milly is my cousin, as a little girl I use to baby-sit her. She was the sweetest girl who would spend the night colouring in, and then go to sleep with cuddles and me curling her hair in my fingers.

As an adult, Milly is still one of the sweetest people I know. Yet now, she is also an extremely talented artist, a successful business woman, plus a women of great consciousness when it comes to the environment and her fellow man. Milly is a woman of empowerment, who is an inspiration to others on just how successful women can be. She is also the tattooist who has done all of my work (bar for one piece).

At a really low point in my life (after a miscarriage) Milly gave Justin and I similar, tattoos. I call it my magic fertility tattoo. The week-end Milly gave us our peonies I conceived Jarvis! Who needs IVF when you can get a beautiful tattoo instead?!! Hmm maybe I should go back for more tattoos? 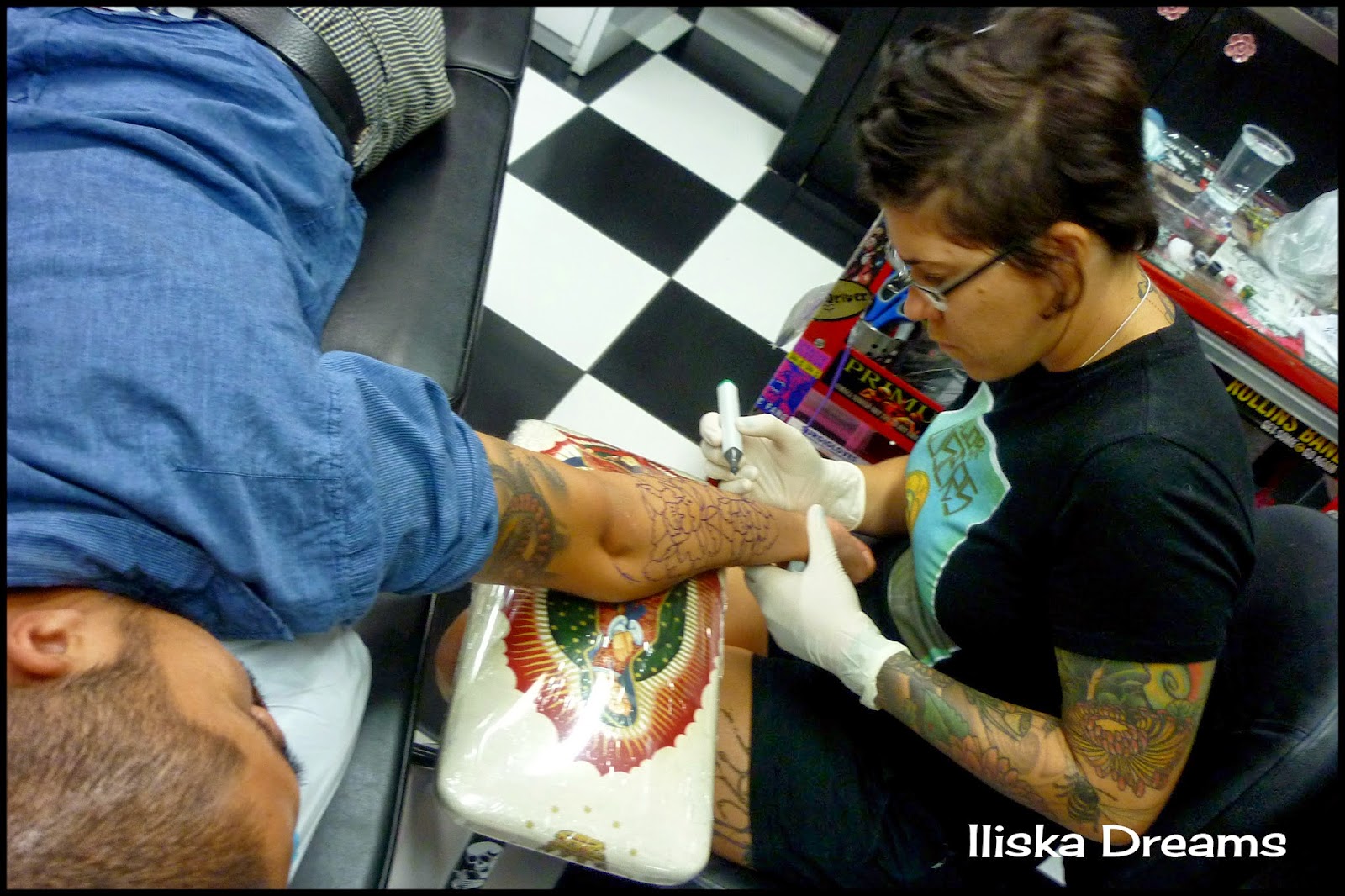 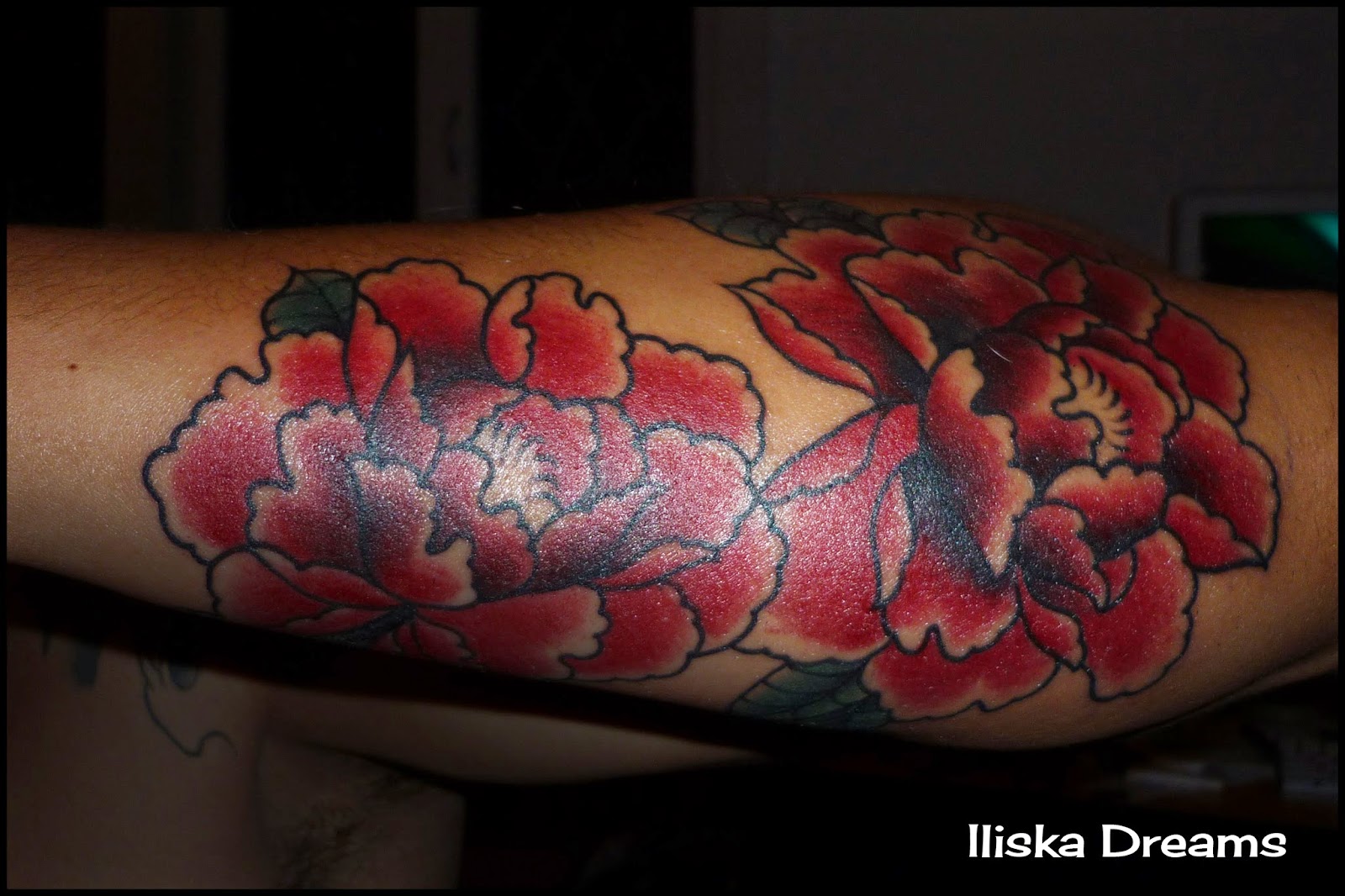 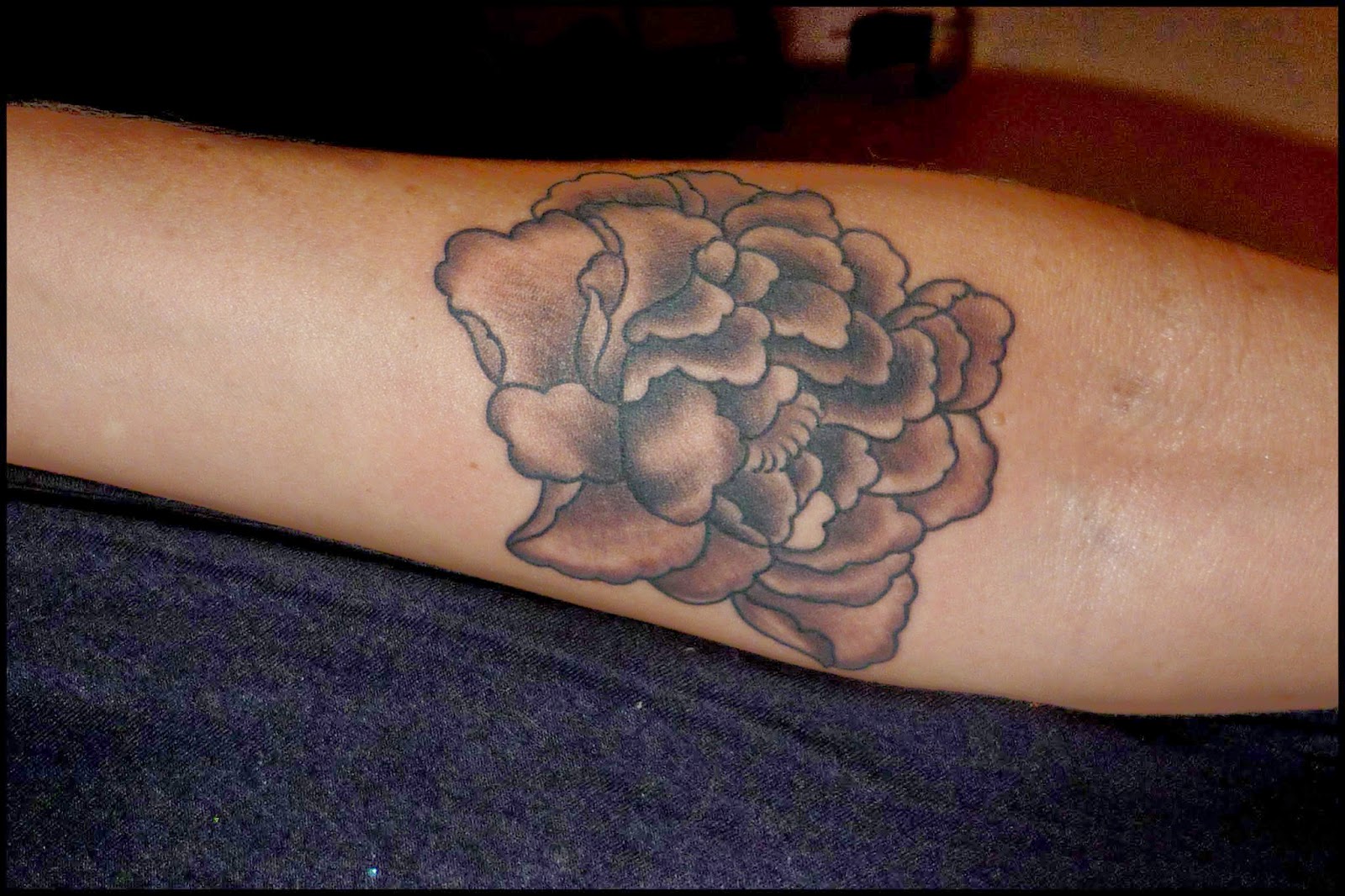 ROCK OF AGES: GUILTY BY MISCONCEPTION
There was a time when tattoos were for sailors and criminals. Ink in the skin meant travels to far-off lands, an anti-establishment attitude or gang memberships. A beautifully ornate sleeve of koi carp, dragons and abstract swirls struck fear into the hearts of many, a signature of the Yakuza, the Japanese mafia, and a warning of trouble at best.
Even today, there are certain tattoos that bare criminal connotations. Tears on the cheek supposedly symbolise the number of people the barer has killed and Latino groups and bikie gangs sport the colours of their clans.
But this is the 21st Century – minds have been opened, culture has expanded and lines have been blurred, if not entirely erased. A tattoo today has no more relevance than our choice of underwear or our hair style.
And yet needle-wielding artists and those baring their subcutaneous sketchings are still being victimised and tarred with that same, centuries-old brush.

Camilla Zavattaro was born into an artistic family. Her grandfather and his father before him were painters and she was immersed in the art world from a very young age.
“From my childhood I watched my grandfather paint with great interest, and he watched his father paint,” Camilla recalls of her youth. “Art was celebrated in my mothers family. They immigrated from after WW2 with these incredible art pieces, centuries old, that I had connected with. This is when I knew I would be an artist of some sort.”
But, as Camilla entered her teens, a chain of events would transform her perspective of art dramatically. When she was 13 years old, her older brother arrived home with a fresh tattoo covering his entire back and the introduction into the art form was made. Several years later, living in , she began tattooing friends just for kicks. Her heart still very much in the art world, she enrolled in college, studying art and refining her natural talents, and it was here that her ‘serious’ tattooing would begin. In a self-confessed “right place at the right time” situation, Camilla befriended a tattooist and her transformation was complete – Camilla Zavattaro was no more, Milly Loveknuckles was born. “It was always definitely something I was always going to do.”

Camilla, Milly, began her professional career in , completing her apprenticeship, finding her niche and continually advancing her skills. But five years ago, with the wellbeing of her then five-year-old son at heart, she decided it was time for a change of scene.
“After 10 years of tattooing I decided I didn’t want to raise my son in a city,” she reasons. “I was visiting Lennox Head frequently, it was the right thing to do.”
Milly established Rock of Ages Tattoo Parlour five years ago, launching the business as a solo venture, but expanding rapidly, now with a family of six artists.
“It’s an incredible work environment where everyone is really a part of an individual art movement and the professionalism of the studio,” Milly says of her business. “Our happy place is in the chair, machines in hands!”

Each artist has their own distinct style, favouring particular techniques inspiration and imagery for their individual work. Milly’s personal speciality is in highly illustrative work incorporating flora and fauna. This creates a more proficient studio offering a diverse range of styles, whether they be chosen from a catalogue or brought in by the client.
In Rock of Ages, Milly’s dream and her journey are complete. But outdated prejudice and archaic opinion are continual, and strengthening, adversaries.
In 2012, the Tattoo Parlours Act was updated. The licensing policy now required each individual to be scrutinised, with background checks, criminal records and even the personal opinion of the police commissioner coming into play to grant the $700, three-year license. And this was just for an individual to practice in an already registered, and similarly scrutinised, parlour.
These laws are in place for good reason. They aim to ensure hygienic, high quality services and restrict criminal activity, known to have been associated with tattoo studios in years gone by. But are these policies squeezing way too tight on an industry that caters just as much to lawyers, bank managers, respectable mums and doctors as it does to bikies and bank robbers? I have known of chefs, builders and other tradespeople involved in criminal activities and using the business as a gateway to those exploits, but there’s no such licensing required in those industries.

“The government are directly taking Australian citizens human rights away, through the disguise of misnamed laws such as the ‘anti- biker’ laws,” States Milly. “It has given the police the power to incriminate or incarcerate people as they choose, be it for protesting, misguided actions, having an organised group (of any kind they see unfit), or recently incarcerating a librarian, mother and community worker for wearing her boyfriend’s bike vest in public. She was jailed, not realising the implications of simply wearing a piece of clothing.”
Tattooing is an industry in which laws are required, that could not be disputed. But the levels to which tattooists need to comply, the false implications they receive simply because of their choice in career and a ‘guilty until proven innocent, and even then carefully watched with suspicion’ mentality are making it harder and harder to ink someone’s skin.
“Tattooists were recently ostracised by similar ‘anti biker’ misguided laws,” says Milly. “ and have new laws of licensing to weed out the gang related tattoo shops by incriminating every single tattooist. It is a licensing which YES we need, I completely agree, but to fingerprint myself, a positively active person in the community, member of the business Chamber of Commerce, who has never worked in a criminals shop is a farce.”
With the individual tattooing licenses and over $2,000 paid out every three years by each and every studio, one has to wonder where funds from this governmental cash-cow are going. But, however the collected license fees are being collected, it is near impossible to see how they are benefiting the industry they are trying to ‘protect’. It would seem, at least at first glance, that these policies are victimising an industry that, yes, has had a less-than-rosy history, but has come a long way since shady, port side parlours and mementos from time served in ‘the Big House’.
Surely this implementation of laws and regulations should be benefiting this now widely accepted industry. But, as Milly shares, the reality is far from a business protected and supported by governmental policy:
“Where is the NSW work, health and safety courses that come with the millions of dollars we are paying for our license?, where is the policing of home tattooing that spreads hepatitis, mutilation of under aged people and so on?”

The injustice and imbalance doesn’t even end at the point of a needle. The individual, the business, even the family members of a legally sanctioned artist. With a total disregard to human rights, personal history or, it would seem plain common sense, these laws are indiscriminately placing black marks against the names of entirely innocent citizens.
This extends beyond the bounds of rationality, even Milly’s 10-year-old son having his name recorded as, quote-unquote, a potential criminal or gang member, simply for being a trustee in his (also entirely innocent) mum’s business.
“This is devastating,” admits Milly. “My son doesn’t even get the chance to make a mistake in life, being already recorded as a potential criminal.”
Not that deviant behaviour is likely to come to Milly’s progeny, but even the virtually innocent act of accidental speeding, a crime of which, grandmothers, charity workers or nuns may fall prey to, will result in significantly more severe repercussions, simply because his mum is an artist.
Public opinion of tattooing, for all but those backward-thinking conservative types, has totally changed. There is no longer anything disrespectful or underclass, let alone criminal about permanently adorning your skin. It is often a beautiful personal expression of love, spirituality and creativity. But, as is a familiar story, the government refuses to change with the times.
“This fear mongering in the media is 10 years too late,” Milly iterates. “Tattoo studios have been a place of creativity and personal connections for a long time – it is intimate and an honouring of our bodies, now more than ever. The outcome needs to be a union of the people of this entire country to dissolve our government’s ‘smoke and mirrors.’
“Times are changing. We need to unite to make sure we are honoured individually as people of .”


You can find out more about Rock of Ages Tattoo Parlour or contact Milly and her team through their website,www.rockofagestattooparlour.com.
Posted by Iliska Dreams at 17:17