SEGREGATION AND DISCRIMINATION. SINCE WHEN IS BEING DIFFERENT A BAD THING?

Have you ever been discriminated against? The topic of discrimination has been going round and round in my mind today. Sometimes it is if the same theme visits you over and over.

Now I know Facebook is not normally known for being educational, nor is it very often very thought provoking. However, today the first two stories I read today were on segregation, or being different. (Segregation means to separate people by differences and discrimination means to treat people differently just because their differences.)

The first one was an older story of Marilyn Munroe and Ella Fizgerald, all the text and the image have come from The History Page, who originally published this on the 21st November. (http://www.facebook.com/TheHistoryPage) 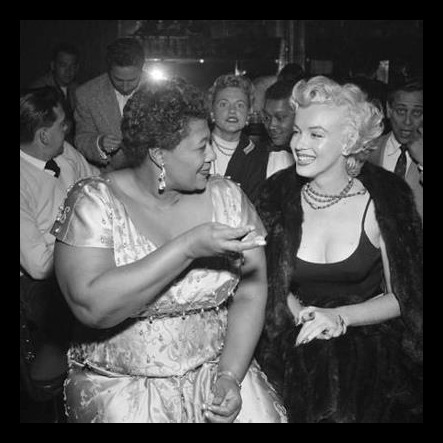 The second story is a recent story on a young guy, who as an experiment for one of his classes at uni wore females clothes, or part of their clothing, incorporated into his everyday wardrobe. Again the images, and his story below, are taken off Facebook.

Both have got me thinking about how far, or not, we have moved for in regards to discrimination. I am curious to know other people’s thoughts. Have you ever been discriminated against?

:: The First is on: Discrimination because of Colour
When Marilyn Monroe learned that the Mocambo, a popular night club, would not book Ella Fitzgerald because of segregation. Marilyn phoned the manager and told him that she would reserve a front row table every night Ella perfor
med there, knowing that her presence would get a lot of press and publicity for the club. Soon thereafter, Ella became the first African-American to perform at the Mocambo, and as promised, Marilyn was seated right up front to enjoy her favorite singer.

::The second story is on: When is a skirt not a skirt?
Last week, as part of a cultural discovery project for one of my classes, I spent three days wearing ‘girls’ clothes while going about my day. I wanted to explore the general reaction and preconceptions that people in my city have to clothing, especially in regards to gender. To me, the idea that a piece of fabric or accessory can be so intertwined with who are in our conscious is perplexing. I didn’t want to show off, or offend anyone by my act of curiosity. Rather, I wanted to act as a meticulous observer of the times, to see if the community around me was really as open-minded as I wanted to believe that it was. After all, if such things really only had a place in the realm of high-fashion and in Scottish tradition, then something bigger must be at work.

On the first day, I wore a long-sleeve pink top cropped at the collarbone. I received many compliments, a few glares and even a free Venti gingerbread latte. On the second, I rocked a pink blouse with a high-waisted belt. Again, the same amount of well-wishes, questions and passing eye-rolls. These things were to be expected, as it isn’t necessarily the norm to see someone like me wearing things like these. I felt collected and confident in these modest outfits, seemingly convinced that the world around me could care less about the clothes someone wore. Most affirming was the response to my nails, which were almost always met with a cheerful grin, a high-five and a few words of encouragement.

What happened on the third day changed my perspective on humanity forever. I dressed myself as I normally would; band t-shirt, cardigan, plain Vans, etc. However, instead of black jeans, I complimented the outfit with a plain black skirt and matching set of tights. For me, this was a huge step in self-image. Years ago, I was barely confident enough to leave the house for school. These days, the opposite couldn’t be more true. As I set off about my day, the absolute worst in people came out in a full-force flurry of expletives and discomfort. I was ridiculed in whispers. I was mocked in glances. I was obnoxiously and filthily cat-called by a construction crew who, from behind, couldn’t tell that I was a man. Stopping by a bathroom before a lecture, a frat-bro went out of his way to shove me into the adjacent wall after eyeing me up and down on his way out. Expletives and names that might induce me to vomit were I to repeat them, were casually thrown in my direction with almost zero passing thought. By day’s end, I feared a full-on breakdown, unable to stand up for myself or what I believed in to maintain the integrity of the observer’s perspective. In a way, I had no right to feel that way, mostly because of the realization that this is the way that many have to live their lives. I fought back tears as every stare and ill-formed word engrained themselves in my sub-conscious.

Though I may not know you, I think that it’s important that we all come to understand why these things happen. In my book, cat-calling, shaming and harassment are among the worst actions we can engage in. As a heterosexual male, I will never truly know the fear that women may experience while walking home from work, going see a friend for lunch, or being sized-up in public based on their clothing. I will never truly know the gut-rot that a transgender individual may feel while being eyed up and down at the store or in class, strangers seeming to think as if the clothing they see before them begs a legal invitation of ridicule. I will never truly know the plights of these people, but as an ally and a human being invested in true equality, it is now my obligation to stand up for them as if I did.

What scares me the most is not the glances, mixed emotions, or 10-page paper that will inevitably come as a by-product of this project. No, what scares me is that this is the world we live in. We exist in a place where individuals living their truths can be subjected, directly or otherwise, to fear simply for living those truths. We live in an age where feeling ‘normal’ in your own clothing can create unfathomable contention with strangers, despite them having zero investment in their lives. We live in a world where the material, the fabric, the pieces that adorn you are somehow allowed to say more about who you are than the convictions in your heart and the sincerity in your deeds.

I don’t know about you, but I refuse that world. I refuse to let these things overcome the passion and genuine honesty that I’ve been so fortunate to bear witness to in my time. I refuse to let backwards, unprogressive mindsets stifle the glow and drive of those who are undeservingly robbed of it. Don’t say it can’t happen to you. If it happened to me, under the most average of circumstances on the streets in a progressive-leaning city, it could happen to anyone, and that is something I truly do not understand.

After all, it’s just a skirt.

What is it about a piece of inanimate, plain fabric that scares you so much?